Firstly I would just like to reiterate how thankful I am of my little sister for the gift of the Airfix model of The Cutty Sark. Never before have I had soooo much fun! It has taken all my willpower to avoid smashing up the frigging thing and throwing it in the bin!

This month’s project has definitely tested my patience. On first sight it may actually seem as though I’ve not done much since the last post, but look closely and you should see more rubbish cluttering up the deck, how the sailors in the 1860s managed to avoid falling over all the crap I’ll never know…. 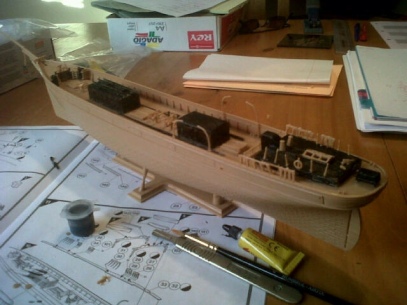 The actual Cutty Sark is due to reopen on 26th April in time for the extra tourists the Olympics will bring. This in only 4 years after the fire that destroyed it in May 2007, thanks, in part, to a £3.3m gift from an Israeli shipping magnate, although I would be amazed if they have had the same problems I have had to deal with.

The Cutty Sark Trust will be pleased to hear that I will be holding off my relaunch until the end of April to avoid any possible media clash. At the moment I am in negotiations with various personalities that have shown an interest in conducting the relaunch. Although I can share the names of some who haven’t made it through the first round of negotiations: Jimmy Saville, failed to attend meeting; The Queen, apparently she’s too busy this year; Lawrence my neighbour, mowing the lawn; President Mugabe, not feeling too well.