The Artist: The fabulous Frank Hamilton 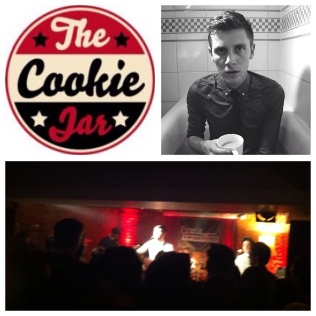 If you ever want to experience a fantastic singer/songwriter you can do a lot worse that attend a Frank Hamilton gig. Following on from #onesongaweek in 2012 that culminated in a sold out gig at London's The Borderline in Camden, Frank has followed it up with a UK tour…..

Tonight was the second night of the tour – held at a great little live music venue in Leicester, The Cookie Jar located in the basement of The Crumblin' Cookie. Frank was on top from, sharing his own brand of indie-folk-pop music and brilliant song writing skills. He is a very likeable fella, lyrics that express Frank's emotions and experiences, from travelling around, moving to a new city, through to finding and losing love.

It was a great set, including the fantastic, 'Things I do', 'Make Things Make Sense' and the splendid 'Flaws and Ceilings'. Frank manages to write about things that relate to everyone: a soundtrack for life. Who can't relate to this….

“I wonder what she's thinking when she lies in bed, coz when I wake up when she's in my head, and I'm thinking in few years time will I still be yours, will you still be mine”

If you get a chance go and see Frank Hamilton: you won't be disappointed.