Recently my Mum told me she was having a clear out and she had lots of stuff from when I was younger: old school reports, stuff I'd made and some Charlton bits and pieces. So it wasn't unexpected when I arrived at mum's the other day for her to hand me some 'stuff'. Loads of old school reports as well as 'projects' I'd done and some examples of my handiwork. But also some Charlton stuff. 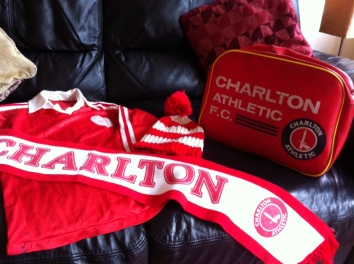 I've been a Charlton Athletic fan for as long as I can remember. In the very distant past I remember my Dad taking me to watch Millwall – that was his team – but for me it was always Charlton. The scarf and hat have seen a fair few matches. When I was a 'cool' teenager I don't think the bobble hat would have seen the light of day too often, although today it is the height of fashion. During the 70s and 80s the scarf was a must wear. Everyone had one on. I'm not sure if the scarf is held as dear in today's 'must have a replica top' world. I was forever thankful of the scarf. The times when I was proud to show my colours: the 5-0 mauling of the mighty Manchester City in 1986 – how times have changed – it was the only match where I can ever remember singing 'we want six'. Or the times when it was used to hide my face: an apathetic performance against Cambridge United – they were then bottom of the league – resulting in a heavy 'home' defeat. I even remember a phase when I wore it tied around my wrist in a 'Showaddywaddy style'.

I think this may have been the first 'official' Charlton top I was given – although I'm not sure it was 'official' or even if such a thing as an 'official' kit existed. It may have just been purchased down the market, or from the club shop, but for me it didn't matter. It was Charlton. But as you can see I wore it out…. 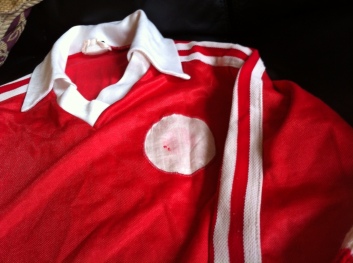 They say what goes around comes around. Never is that more true than in fashion. At school the lads all have these retro bags, and they don't believe that I once had a bag like that, and that I was actually 'cool'. Enough said….

Coming soon: My Mum had a clear out (Part 2) including old school reports and lots more.