After running every single day for the past 26 days it all starts to become a bit normal. Tonight was another visit to the gym – 4 or so miles on the treadmill.

Another day. Another pile of books that need marking.

A long day at school that went something like this: early start to finish some marking; followed by a full day of teaching, including a lesson with my lovely Y11s producing some hilarious role-play characters; followed by a late finish inputting data.

Therefore it was a late night pounding the streets of Bourne.

That's is one week done!

The last few days have been all about the marking…early morning marking…. 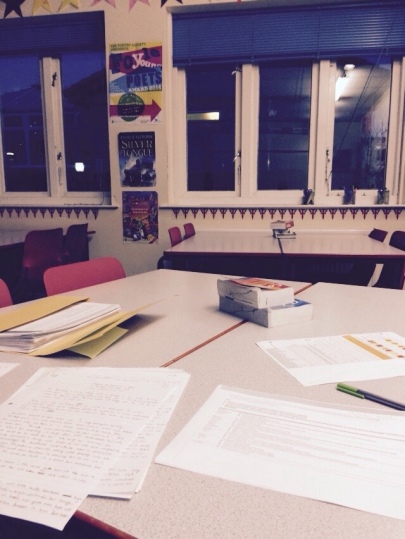 Despite the truck load of marking that I brought home with me tonight, November's Challenge is still going strong. I managed to create another masterpiece: a modular star.

Not particularly difficult, it just requires some time, a bit of patience and 6 pieces of paper all folded in the same way. Make them, put them together and with a bit of swearing luck it will form a star. At last, a piece of origami that actually looks better due to the 'special' origami paper I purchased. It reminds me of a Christmas decoration….

If you have 6 handy squares of paper and the time to have a go, then click here for the instructions. If not then you're probably just a 'normal' person and wouldn't think twice about wasting your time on something so pointless!

But given my new found love of the traditional Japanese art of paper folding, I found it 'magical'….. 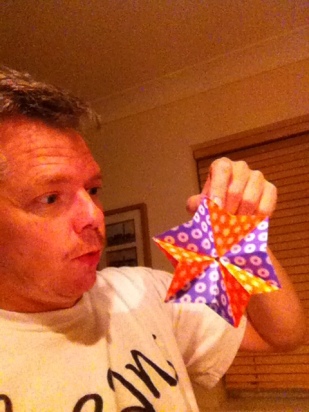 The final week of the first term is finally over and since it has been one whole week since the last blog entry *bows head in shame* I feel I should write something, even if very little has actually happened.

My classroom is now the owner of beautiful new energy efficient lighting. Fitted after school on Thursday to enable a day's trial, before a decision was made to fit them throughout the block late on Friday. Although this is great news, being able to see students in the classroom I feel is an essential part of teaching, it did threaten our chances for winning a tin of chocolates. Earlier on in the week my tutor group had completely decorated the room in Union Jack bunting to celebrate 'Red, White and Blue Day' to bag said chocolates in a school competition. I had, of course, completely forgotten that the engineer would appear on Thursday to fit lights, bunting was taken down, as was our chances of winning the competition.

A visit to the school library meant a collection of teenage fiction to read over the holiday…. 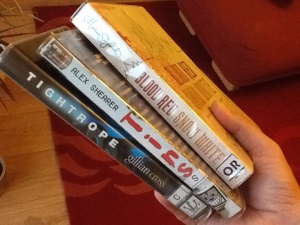 Not that I'd actually get round to reading them because of the MASSIVE stack of marking I have to do….

Friday evening came to a close with a walk into town to partake in a few pints of the black stuff in a local hostelry. Who should be at the bar when I arrived? One of my neighbours, already slightly the worse for wear. It was quite easy to recognise this due to the fact that despite being neighbours for three and a half years he didn't seem to know who I was, he shook my hand and said, “I know you from somewhere”. After giving him a couple of clues the penny finally dropped, before he began to introduce me to all his equally drunk mates. The next half hour was spent discussing such subjects as: literature, education, darts, beer and….. the 80s TV show Rainbow…mainly because one of them had the nickname 'Bungle', and did look surprisingly like him…

Its been a while since a blog post, so here goes……

On the work front it has been a crazy last couple of weeks at school which has meant that I have a fairly long ‘to do’ list over half-term: marking, reading, marking, planning, marking….and….yeah….more marking.

On the running front the weather has meant that it has been a bit touch and go lately. The last two weekends I had planned to run a couple of races:

Although in both cases, unlike the France/Wales rugby, they made a decision 24hrs before the start. I’m gutted the 30K has been cancelled, with all the miles I ran in janathon I felt like it would be a good way to finish it all. I have managed to do a few runs, although I hate the thought of starting a run in the cold, once I get going I think it’s fantastic. It’s great to fill the cold air in your lungs, very invigarationg! Since janathon came to an end I have had no problem settling back into the old ‘run when I fancy it’ routine. The dog joined me this morning for a gentle 4 mile jog through woods and over fields on the outskirts of town.

We also have some good and bad news on the music front…..firstly bad news….

Frank Turner has released another 150 standing tickets for his Wembley gig in April. Which is bloody typical since the only tickets I could get a couple of months ago were seating. I thought back then to hang-on and wait for some more standing tickets to be released, but began to panic as it was near sold out, so bought seating tickets. Damn! Damn! Damn!

And the good news….

It has been announced that Beans on Toast will be opening at the gig. Which is fantastic news!  So full line-up:

…nice! Also on the music front….I am loving The Vaccines and Bombay Bicycle Club at the moment….

Finally, my February challenge of learning to play the ukulele is not going particularly smoothly…..enough said.

But on a more positive note……tomorrow’s picture completes Project365!