….it has been three weeks since my last blog.

Quite a lot has happened in that time….

A trip to The Engine Shed in Lincoln to see the rather fabulous Lucy Rose. Since buying the album 'Like I Used To' I've been a fan….and when I heard she was to play Lincoln I was on it like a rat up a drainpipe.

Lucy Rose has been described as an English Suzanne Vega and been likened to Laura Marling…so what could go wrong? Nothing. The set was full of her own brand of acoustic folk/pop yet mixed with jazz-funk rhythm that cannot fail to entertain. Good gig – she's going to do well me thinks.

Next up was a trip to the ole smoke to see Frank Hamilton (again) at The Borderline. Although not the best gig of his I've been to, due in part to the big heffer standing in front of us who seemed intent on trying to step on the feet of everyone, complete with her ridiculous boyfriend who thought just because he had a big camera this gave him the right to be a complete arsehole. And what is it with girls in London and their stupidly huge handbags that that refuse to put down, they just hang around their elbows sticking them in you. Now I'm a Londoner and proud of it, but things have definitely changed.

But Frank himself was on top form, not the best set list he's every played, but he is slowly attracting more and more acclaim, I think 2013 is going to be a good year for the man. 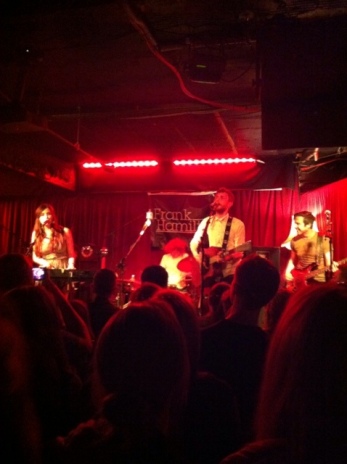 There was also a very early, or should I say late, Christmas with my sister that I somehow remembered to blog about here.

School has been absolutely crazy: workshops, immersion days and so much exam prep that if my boys and girls don't pass I'm not sure what to do. This week we said goodbye to the Y11s…I've really enjoyed the last couple of years with my group, they've all done really well and developed into lovely young men and women over the years. I wish them all the luck for the future.

But half-term has finally arrived….a relaxing week in store with a few bits and pieces to do at home….mum's birthday party…Billy Bragg gig….and on the horizon we even have #juneathon. Oh crap!