I was a parkrun tourist today.

I'm visiting my sister in Kent and her closest parkrun is Tilgate Parkrun near Crawley. So we planned to set off at 8am to give it a go. When I say 'we', I was the only one planning to run it, but my sister and her two kids were coming for the ride. It's been a while since I've had little ones, so had forgotten just how crazy things can be when you're trying to get out the door, Grace is 22 mths and Stanley is 8 mths, so this morning was not a matter of get up and go.

A few things needed doing before we could leave: nappies changed; bottles drunk; breakfast eaten; changing bag prepared; pushchair sorted; clothes on; spare bibs in bag; snacks and drinks in bag; nappies changed; toys in bag; pushchair in car; kids in car seats; car seats in car; and we were ready to go, only a couple of minutes behind schedule.

Tilgate Park is about 15 miles away, despite having no idea where we were going we made it in good time, and after unloading all the stuff (and kids), walking in the direction of everyone else, we arrived at the start with ten minutes to spare. A quick warm-up and we were off.

As is usual with every other parkrun I have been to, it was well organised and well attended. The 5km course began near the boathouse and does a lap of Tilgate Lake before heading to Titmus Lake, up a short sharp incline (which is not particularly short, but definitely sharp), before turning back towards Tilgate Lake for a second lap, at which point I managed a high five with Grace as I sped whizzed ran past, before reaching the finish in 13th place in a time of 19.57.

After the run we headed to the fantastic looking playground at the top of the hill….

This playground may have looked fantastic, but the items in the playground had a dark side: they were slightly more tricky than they looked. Standard swings: no problems. Springy bouncy jeep thingy: fine, until a lad jumped on and began rocking the thing like it was traversing the moon. Slide one: no problems. Slide two: huge metal corkscrew slide, which was vey high, had one go but too scary to attempt again. Slide three: steeper than it looked, Grace even managed a bit of free fall at one stage whilst travelling down it. Scramble net bridge: tried but too difficult, one step on and feet fell through holes. 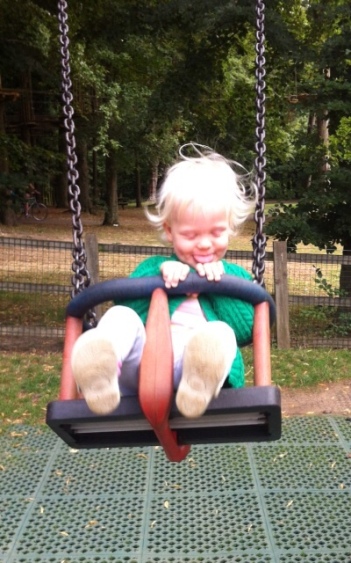 After the playground we settled on the grass for a little picnic, a little relax, and three 'little' trips to the bin.